Posted on June 18, 2012 by arthousesouthampton

We were a happy little posse of Art House people yesterday as we headed off to be part of the pre-show events at the Nuffield Theatre’s outdoor spectacular, Waterlitz with Générik Vapeur, featuring Omni Man – a giant made out of shipping containers.


This was the last in the series of four outdoor arts events arranged by Art at the Heart to get a buzz going for the new Cultural Quarter, and it didn’t disappoint!


The British Summer was in full force, with the event having to be moved from the Saturday night due to high winds and the rain coming down onto a chilly crowd.  We were on site from eight with our new walkabout idea, ‘The Chai Pirates’, which incorporates our facepainting pram with a chai urn, samosas and muffins – as well as crew dressed up as pirates, of course.

We were so pleased that community arts groups had been involved in this event, as these grand international scale performances are a great platform for little groups like ours to get out to a bigger audience.  This was something we’d suggested to the Art at the Heart crew and we were pleased to see it happen!  The Soco music stage gave some local musicians a chance to perform and there were walkabout performances, a drum circle and of course us with performer Guy Heathcote in piratey regalia, Nina with her facepainting pram and Ziggy & Jani serving freshly made chai whilst Bik sold goodies at gunpoint (a surprisingly good sales tactic!).


The rain came down, but there was still a good crowd and an atmosphere of anticipation as Omni man started to move his head from side to side, beaming a light through the falling rain across our heads.


At 10pm we all gathered to watch, having no idea what to expect, as we knew this performance was likely to be as surprising as the previous pieces – Alive and Ablaze, Barricade and Midsummer Dreams.


The first set piece was a flying dinosaur skeleton with a lady rider, showering the crowds with white ticker tape.  The fabulous music for the performance was all live and the container giant was used to show a series of projections.


What a spectacle!  The giant changed colour, danced to bagpipes, sections opened and shut to become a living room stuffed with consumer goods, the deck of the Titanic, a stage for Hamlet.  At one point, a projection showing a cyclist changed into a real cyclist, suspended high in the air shouting a quip about a certain former lady Prime Minister.  Add to that a suspended mini with a punk hanging out of the door, a wooden aeroplane showering us with golden sparkles and a polar bear on a swing…… 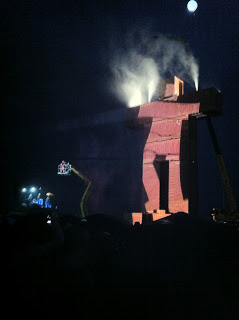 At one point the band broke into ‘Tea for Two’ whilst stewards wandered through the crowd offering cups of tea and squeaky frogs to the audience.

Underlying the series of set pieces was a repeated theme referring to the recent Occupy and Arab spring movements, as well as voicing the undying French revolutionary spirit!


The finale saw Omni man lit up with fireworks, before reverting to the original projection and waving farewell to the lady on the dinosaur.

Our favourite bit was a non-rehearsed unofficial ending as we were packing up.  We thanked one of the performers afterwards he launched into a tirade of French denouncing the British rain, waving in fury at the sky.  “Bienvenue en Angleterre” we chorused back!


What was so encouraging, as with the other three events in this series, was the excellent turnout.  This tells us that the people of Southampton have a genuine interest in culture, and this makes us very happy indeed.


We had a great evening, were inspired, challenged and entertained – we do hope this is a sign of more good things to come for Southampton! 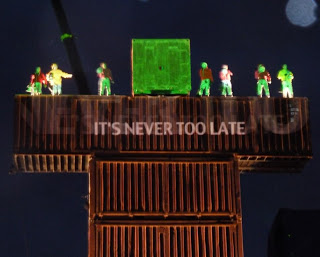 
We would like to officially deny that the three crazed pirates who “shot” at the Lord Mayor with toy pistols whilst yelling “Arg, we’ll ‘ave yer swag ye scurvy landlubber” had anything to do with us.  Honest.  We would never do such a thing 😉

(Thanks to Dave Hubble for the photos)

Sign up for our newsletter, so you don’t miss out on stuff:

The Art House is a not-for-profit café, gallery and arts venue in the centre of Southampton. We are a place you can meet new people, meet up with friends or just come in by yourself. Our licensed café offers delicious organic lunches, Fairtrade tea and homemade cake. We also have a busy programme of events, workshops, and art exhibitions, a clothing and crafts boutique and lots more. Most of our crew are volunteers and you might even want to apply to join them. Come along and enjoy our unique, community run space.
View all posts by arthousesouthampton →
This entry was posted in Community news & views. Bookmark the permalink.