Old man in my house.

In one form of Pidgen English, a piano is called “Old man in my house, you hit him white teeth he laugh, you hit him black teeth he cry.” One of the first items to enter the Art House, even right back to our first home in Bedford Place, was Jani’s (formerly Ziggy’s) beloved old piano. 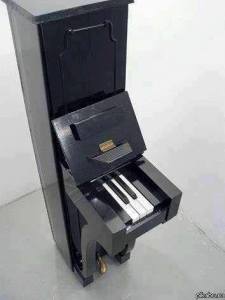 No, not that one! 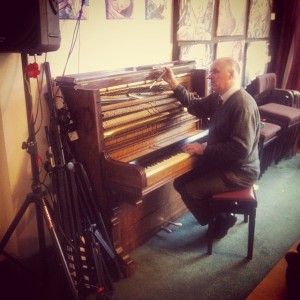 That one! (Being tuned by Shaun Cassidy)

In both venues it just fitted in perfectly, like it was at home.  So, whenever the opportunity arises, we like to welcome along accomplished virtuosos to come and demonstrate their skill on his, slightly honky tonk and little-bit-creaky, keys.

Words like ‘gifted’ are bandied about rather too readily. Talented people will almost certainly have a seed of passion for their art and maybe a small predisposition to, say, pitch-perfect hearing, although, as in the case of Shaun above, this too can be honed, especially when one is blind, as he is. (Shaun is a member of the Association of Blind Piano Tuners, and one of the most highly respected in the South.)

Where innate ability leaves off, however, practice takes over. Practice, practice, practice. This process of practicing is what will eventually lead to the tapping of a seam of creativity, and what we hear when the piano laughs or cries at those finger tips, is those hours and days and weeks distilled into one moment, channeling something unknown and previously unheard that was, perhaps, always there waiting to be released!

You have an opportunity to share such an experience on Wednesday 16th April when we welcome two multi-award-winning singer-songwriters to perform their work for you as they hit the old man who laughs and cries (with his lid off and all mic’d up.)

Find out more about this event, and book tickets, here.

Kate Daisy Grant first played here last year when she and her husband, the amazing Nick Pynn, performed the double set that won them the Best of Brighton Fringe award.

Here are Nick and Kate, performing one of Kate’s songs at The Art House last year.

Nick came to us as a recommendation from one of my favourite comedians, Boothby Graffoe, who agreed to come and gig in our tiny venue after a random Tweet expressing our wish that we were a little larger so that we could host people like him. The following day I had a call from his manager to ask what dates we had, and that was the start of a breath-taking year of events we have hosted, showcasing some of the biggest up-and-coming names in entertainment.  They have all blown us away and, what is more, have almost *all* said that it was one of their favourite gigs and could they return again!

Many went on to recommend us to friends, sometimes, as with Boothby, as they were actually leaving the building! This is also what happened after The Waitress for The Bees played here (wow, what an extraordinary performance that was!) when she contacted us to recommend Daisy Chapman, a highly accomplished and greatly admired singer-songwriter (or sinner-songwriter as she describes herself.)

So two piano-playing Daisies were available on the same night courtesy of a virtuous chain of events. It had to be called ‘Daisy Chain’, of course! 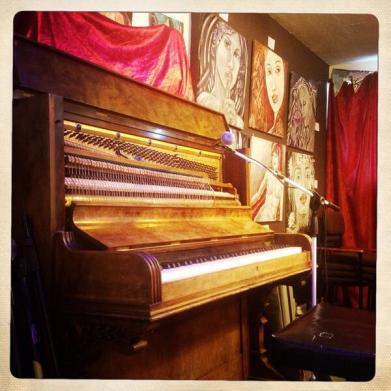 Had a quite amazing night and the Old Man sounded fabulous! 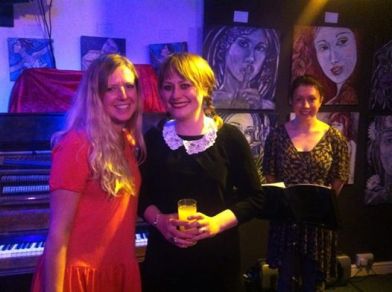 Daisy Chapman and Kate Daisy Grant (and Sue Lord on violin.)
Here’s another chain thing.. Sue plays with Waitress For The Bees (who played here last year) in the The String Beans Quartet..

We hope String Beans will come and play someday for us.
In the meantime, Kate Daisy Grant and Nick Pynn will be returning to The Art House on Friday 1st August 2014.

I am a founding director of a Community Interest Company called The Art House Southampton CIC in the UK. I am a community artist / promoter / facilitator / technologist / general tinkerer! I believe that through the arts, people can rediscover themselves (and thereby reclaim their power.)
View all posts by Bik →
This entry was posted in Behind the scenes, Events, Our history, Our philosophy. Bookmark the permalink.
Loading Comments...
%d bloggers like this: